Sign-up to receive the latest updates, news and tips from WesCare Pro in your inbox every month!

Our approach to behavioral health care is to provide a comprehensive, coordinated, managed mental health program for each client we serve. We believe our approach is flexible and dynamic, designed to meet the evolving and ever-changing needs and demands of our clients and their team.

Motivation: Why It’s the Glue That Holds the Whole System Together 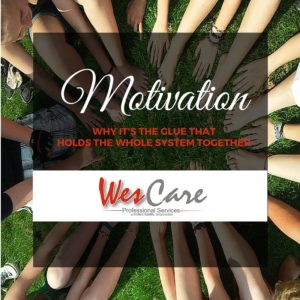 At WesCare, we provide incentives as a way to help encourage those in our care to abide by the rules established within our facilities. After creating a structure with rules and procedures, and establishing ourselves as authority figures, the next step in our 3-part behavior modification system is to motivate our clients to comply.

Teachers use behavior contracts in their classrooms to encourage positive behavior among their students. We use them in the same way with our clients to motivate them to make positive choices, and adhere to the structure of our program.

How to Create a Behavior Contract

To make a behavior contract, we first identify the challenging behaviors the individual is exhibiting, and then determine the positive behaviors that should replace them. We frame the contract to focus on those replacement behaviors rather than the unacceptable ones to stress what we want to see instead of what we don’t want to see.

For example, if the person in our care hits, instead of waiting for him to display the behavior and then saying don’t hit, we’ll remind him of his behavior contract and how much money he can earn several times throughout the day. We’ll also praise him for avoiding the negative behavior for each segment of the day he doesn’t display the behavior. If he has a slip-up we don’t focus on what he did wrong, rather we encourage him to get back on track and earn as much as he can for the remainder of the day.

At the end of the day, we review the contract with him and point out areas where he can improve and perhaps earn even more the next day. It is important for the staff person to act as an advocate in this system. You can do this by reminding him that it’s you and him against the behavior contract and together you both can win. Telling him you are going to take his money away because he failed to reach a certain goal only makes him angry with you. He will see you as an obstacle to maneuver around rather than an advocate to consult with in his time of need.

We allow the client to help decide what goes into the agreement. The more engaged an individual is in developing their own behavior contract, the greater their commitment is to it. We draw it up, they sign it, and the staff works to reinforce it.

An incentive is something that encourages someone to take an action or accomplish a goal. Finding that special thing that motivates someone gives a caregiver a tremendous amount of leverage.

The incentives we give vary based on the individual. Most of the time, we use money. For some, money is a major motivator. Others, however, find money of no interest. For those who have no concept of or desire for money, there’s usually something else we can find that motivates them. From Pokémon trading cards to electronic devices—the key is to use something that they greatly value and can buy into. If they can’t see the benefit in working to receive that reward, then they’d have no reason to comply and thus lack the motivation needed to be successful.

How to Use Incentives

We have one simple rule: We don’t give you anything but an opportunity. If individuals in our care do not take advantage of the reward available to them to receive, it will not be given to them. It’s something they absolutely have to earn; there can be no compromise here. If you make exceptions, you jeopardize the entire system for the other persons as well.

We control the structure and the system and all the processes within the facility. If we see fit to change the rules of the game to fit the system, we will do so., if it serves the greater good. Here’s an example:

A client has three goals:

He can earn a dollar (choose an amount that motivates, is age appropriate and within your budget) for each day he meets the goal.

If we learn he’s having problems in school, then the weight attributed to reaching the school goals will increase while the reward under the other two categories decrease.

We’ll reduce the rate for his other goals to ten cents each a day. And instead of just one dollar going into the pot for reaching his school goals, he can receive $2.80 if he does. School seems to be the area he’s having the most trouble with and where he needs more of a push to improve.
We can also change the goals on his contract for two additional reasons: If he has reached the goal, or if the goal isn’t effective.

It’s also important to limit the goals on the contract to just a few so you both can remember them without having to refer to a written document each time you discuss them.

Also, make one goal relatively easy for him to meet daily, the next goal can be a little more challenging and the last one can be even more challenging. This allows him the opportunity to acclimate himself to the new system and provide some incentive for him to continue on difficult days. As he continues to grow and understand the system you can replace the simple goals with goals that are more complex.

We find that when those in our care are properly incentivized, the challenging behaviors diminish.

Exceptions to the Rule

There’s always someone who refuses to comply regardless of how stringent the consequences or enticing the incentive.

This happens in the broader society as well. If you don’t care about the consequences of breaking traffic laws, or the incentive of lower insurance payments, a red light is not going to stop you from running through an intersection. You’re clearly not motivated to follow the system in place.

The same can be true in your home with your own children.

When an individual just doesn’t care about what happens to them and is not motivated by anything—no matter what—no structure, respected authority figure, or concocted incentive will change that. We all are governed by various structures and authority figures, and are incentivized to move about these various systems. However, it is our own needs, desires, necessities of life —or more simply, our motivation —that holds the system together.