Sign-up to receive the latest updates, news and tips from WesCare Pro in your inbox every month!

Our approach to behavioral health care is to provide a comprehensive, coordinated, managed mental health program for each client we serve. We believe our approach is flexible and dynamic, designed to meet the evolving and ever-changing needs and demands of our clients and their team.

Authority: Why You Need It and How to Get It 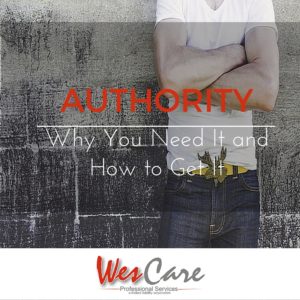 Whether you’re a parent, guardian, or caregiver, a title alone does not make you a respected authority figure. It’s the actions that you take over an extended period of time, combined with your given position, that make the difference. If you’re struggling in your role as an authority figure, read on to learn what changes you can make to step up to the plate, and transform the lives of those you lead and/or care for.

How to Establish Yourself as an Authority Figure

It’s important that you establish yourself as an authority figure right away. One step in that direction is to create a solid structure (as was discussed in the first article of this series) in the environments of those in your care. They must know exactly what’s expected of them and given limits. Beyond that, they must also be made aware of the consequences they will face if the boundaries set for them are crossed, and held accountable if they are.

Now what if you’ve already lost respect as an authority figure? It this is the case, don’t worry; you can turn over a new leaf. Establish structure, review the rules and apologize for not being as disciplined as you should have been. Then reassure those in your care that you will be more diligent in exercising your responsibilities.

To establish yourself as an authority figure, you must be able to issue reasonable consequences related to the unacceptable behaviors in question. You must also consistently carry those consequences out.

As an example, let’s look at the legal system and continue our traffic analogy from last month.

Say a highway patrol officer catches someone speeding and gives them a ticket. There’s a system in place that ensures the ticket will be paid, or dire penalties will ensue.  Having such a system helps position the officer as an authority figure. He or she has the ability to deliver a consequence and follow through on it.

However, if the courts were lax when it came to issuing traffic fines, license suspensions, or arrest warrants; and if insurance agencies never increased the premiums of driver’s who broke the rules—it’s likely even fewer people would take the laws of the road to heart.

As caregivers, you are the policemen and women, those troopers who enforce the structures and rules of the land. You have to be able to issue consequences, stand firm in those consequences, and have them carry some weight. Otherwise, the lines between who’s in charge and who’s not will become blurred, and the hitting, screaming, destruction of property, and other challenging behaviors, will only increase.

How to Set Consequences

What’s the number one rule for setting consequences?

Do not make promises you cannot keep.

Doing so will surely erode your own authority. Once those under your care get wind that you’re constantly making threats you can’t possibly implement (No TV—forever!), they won’t take you seriously. You’ve proven that you do not mean what you say or say what you mean.

It’s important to note here that disciplining while angry is NOT OK. Think before you speak or before delivering a consequence. Take five minutes or more to figure out what you’re going to say and/or do. Ideally, you should look at what you’ve written down as a consequence for the type of behavior expressed. An officer, for example, no matter how mad he or she gets, cannot tell a person they stop for speeding that they will be locked away in jail for life for cursing at them. There are written rules and procedures to follow. You should have a plan in place as well to help determine the best consequence to dole out.

Only set consequences you have the power to enforce, and follow through every time. This will build trust in the eyes of those under your care, it will show that you can’t be pushed around, and will help you to be seen as someone worthy of respect.